The White River provides many important ecological functions such as wildlife migration and foraging corridors, nesting and reproductive habitat for everything from bats to turtles, and of course, it’s also home to a regionally important destination fishery. It is at the very heart of our own human existence in central Indiana.

Many animals spend large portions of their life on the banks and in the shallows of the river. Because of the dynamic water levels of the river, its banks often provide reliable passage ways for wildlife to move in search of food and mates through urban areas. These ‘green corridors’ keep wildlife population healthy and diverse.

What Lives In and Along the River?

Mussels. There are 10-12 species of mussels living in the river. These long-lived, clam-like creatures live on the riverbed and are an important indicator of water quality. They improve water quality by filtering out bacteria and pollutants.

Snapping Turtle. This turtle can grow to 18 inches long and weigh up to 50 pounds. Its shell is dark brown to black, helping it hide in mud. Their necks and relatively long tails have a yellowish color while their head is dark. As their name suggests, they’re not the most friendly creatures when they’re disturbed and will aggressively bite, so leave them be!

Smallmouth Bass. Very popular for those who fish, including fly fish, the native smallmouth bass is common in the White River. It’s generally an olive color with a light-colored bottom and brown vertical bars on its body. They like warmer water and during winter will go to the deeper parts of the river.

Freshwater Drum. Also known as a white perch, rock perch, or sheepshead, these fish are silvery-gold in color and have a distinct humpback shape with a top (dorsal) fin that has two separate parts. They like the deeper parts of the river. The males can actually make a grunting sound (hence their “drum” name) during mating season.

Flathead Catfish. A variety of types of catfish live in the river, including the flathead, which has a broad, flattened head that kind of looks like a shovel. They’re a muddy yellow color with a pale belly and can grow up to four feet in length and weigh as much as 70 pounds! They stick to the river bottom or hide under logs.

American Eel. While these long, snake-like creatures are native, they are relatively rare in the river. You’ll only find females in Indiana as the males stay near the mouths of rivers near oceans. While males reach about 18 inches in length, females can grow up to five feet!

Muskrat. These medium-sized rodents thrive in wetland environments. They have short brown fur with a long tail that is covered in scales rather than hair. They spend most of their time in water and live in traditional families, burrowing their nests into the water bank with an underwater entrance.

Woodchuck. Also known as a groundhog, they have brown to brownish-grey fur and live in meadows, woodland clearings, and other grassy open areas. They are mostly vegetarians and live in extensive tunnel systems they build. Not to be confused with the Beaver, woodchucks have a long and bushy tail (not leathery and flat like a beaver) and do not live in an aquatic habitat.

North American Mink. The mink has a ferret-like long and slender body covered in dark brown fur. It lives in dens that it burrows in riverbanks or under logs or stumps and can both swim and climb trees.

Beaver. Like the muskrat, the beaver is a semi-aquatic rodent, spending most of its time in water. Unlike the muskrat, its scaly tail is flat rather than long and pointy. You’ll see evidence of the beaver with tree stumps that have been gnawed off by their large front teeth. They use the stumps to create small dams in streams or side channels in the river and then build a lodge with an underwater entrance in the water.

Coyote. You’ll usually see these small canines weighing up to 40 pounds in packs. It has a beautiful brown and grey coat of fur with a long, bushy tail with a black tip. Coyotes are highly intelligent and nocturnal, meaning they are night animals. They’re very flexible creatures, living a wide variety of habitats and eating almost anything they can find.

River Otter. Once endangered in Indiana, the river otter was reintroduced to the ecosystem by the Indiana Department of Natural Resources in 1995 and is now a healthy population again. You’ll find these brown furry mammals swimming along the shore, especially in the morning and evening.

Bald Eagle. You’ll find the national emblem soaring above the river and if you’re lucky, diving to the river’s surface to snatch a fish.

Great Blue Heron. You’ll find these majestic birds flying up and down the river, resting on treetops and wading in shallow waters looking for fish.

Belted Kingfisher. These small to medium sized birds look kind of like a blue jay, with a slate blue body, a white neck, and an always-fashionable mohawk on their large heads. You’ll be surprised as they dive into the water (their eyes are adapted to see under the water’s surface) to grab smaller fish.

Great Egret. These beautiful birds are snow white with a long orange pointed beak and black legs. Like herons, you’ll see them wading in shallow water looking for fish to grab. They are a species of concern in Indiana, which means their populations are threatened. They’re most abundant in the late summer and early fall as they begin to migrate through Central Indiana to warmer temperatures down south.

Osprey. Ospreys have a brown top and white bottom, with a brown patch near the middle of wings. They are larger birds that will soar high over the water before diving feet first into the water to grab fish. They also have rather distinct nests, often places on top of poles or dead trees.

Red-tailed Hawk. One of the most common hawks in Indiana, you’ll be able to see them perched in trees, fences, or utility poles in natural areas around the state. These brown hawks have distinct cinnamon-red tail feathers and can soar very high in the air, flying miles without having to flap their wings. They eat smaller mammals like mice and rabbits.

Milkweed. Absolutely critical to many insects including the monarch butterfly, who exclusively lay their eggs on milkweed leaves. There are many types of milkweed, some more beneficial than others, but planting milkweed is one of the easiest things you can do to help pollinators like the monarch. You’ll find vast plantings of native milkweed along the urban wilderness trail on the river. The upright plants can grow to five feet high, have flower clusters at the top, and produce seed pods about 4 inches log covered in little nubs. If you break a leaf or stem, a milk-like fluid will seep out, giving the plant its name.

Riverbank Grape. This wild grapevine can grow up to 75 feet long and is found hanging from floodplain trees where it can find sun. Mature vines have a reddish-brown, shredding bark and can be up to 8 inches thick! The fragrant flowers produce bunches of berries that are edible, although very sour until after a frost when they begin to turn more sweet-tart.

Cottonwood. These large trees seem to grow out of nowhere, growing 5 to even 15 feet each year. You won’t be able to wrap your arms around a mature cottonwood as their dark grey trunks with very deep ridges can be 9 feet in diameter (that’s 28 feet around!). They get their name from the cotton-like seeds that blow through the air in early summer.

Five species on the State of Indiana’s list of threatened and endangered species call the White River home and depend on the protection and restoration of the habitat it offers for their survival.

Kirtland’s Snake. This small non-venemous snake is dark reddish brown with a bright red, pink, or orange belly bordered by two rows of black spots. It is nocturnal and spends its time underground in burrows and lives in wetlands and forested floodplains along the river.

Mouse-eared Bats. Three similar mouse-eared bats present along the river are endangered. All are smaller than 4 inches in length and have wingspans of around 10 inches. The Little Brown Bat has a small body with glossy brown fur. The Northern Long-Eared Bat has lighter brown fur. The somewhat smaller Indiana Bat can be grey, black, or chestnut in color. All bats depend on insects for their diet and can be found in forests and agricultural areas and have been threatened by pesticide use and by the devastating fungus-caused disease white-nose syndrome.

Black-crowned Night-heron. Much smaller and chunkier and shorter in shape than the more common Great Blue Heron, these birds are light grey with a well-defined black back and crown. They are most active after dusk when you can find them standing or slowly walking at the edge of shallow water looking for fish to eat.

Over the centuries many plants and animals that are not native to the river’s ecosystem have been introduced. Some of these have become invasive, a term that refers to when an introduced species is able to spread and outcompete native ones and reduce biodiversity. Today people are still planting non-native plants that threaten to become invasive. If you’re planting anything, using native plants is encouraged to protect our natural ecosystem.

Asian Bush Honeysuckle. One of the most common invasive plants in Indiana, these shrubs grow to about 15 feet tall and have very dense egg-shaped leaves. Originally introduced for erosion control, the shrubs now form a near impenetrable wall along many Indiana streams and highways. They prevent native plant species from growing and supporting native wildlife.

Eurasian Milfoil. This aggressive underwater plant looks like long bushy green tails just below the water surface that can be up to ten feet in length. It quickly colonizes shallow waterways and thrives on nitrogen and phosphorus runoff from lawns and fields. It can quickly clog a waterway, making it difficult to paddle through.

Garlic Mustard. Like many invasive species, garlic mustard emerges earlier in the year than native plants and is able to gain ground to form dense mats and outcompete native groundcovers (that native insects and wildlife depend on). Garlic mustard starts as a mound of round leaves in the first year, shooting up three-foot stalks of rough triangular leaves with small white flowers the next spring.

Learn more about the native plants and animals from the Indiana Wildlife Federation, a non-profit organization dedicated to their conservation. 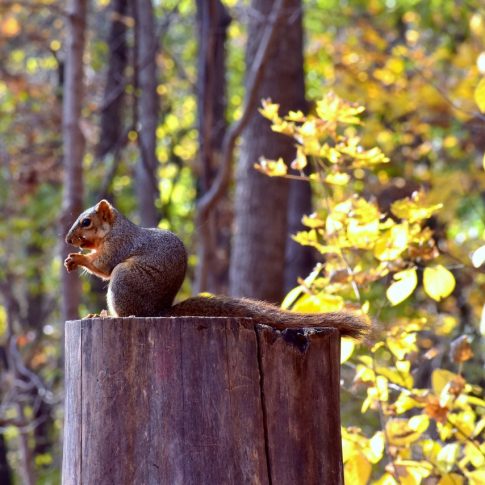 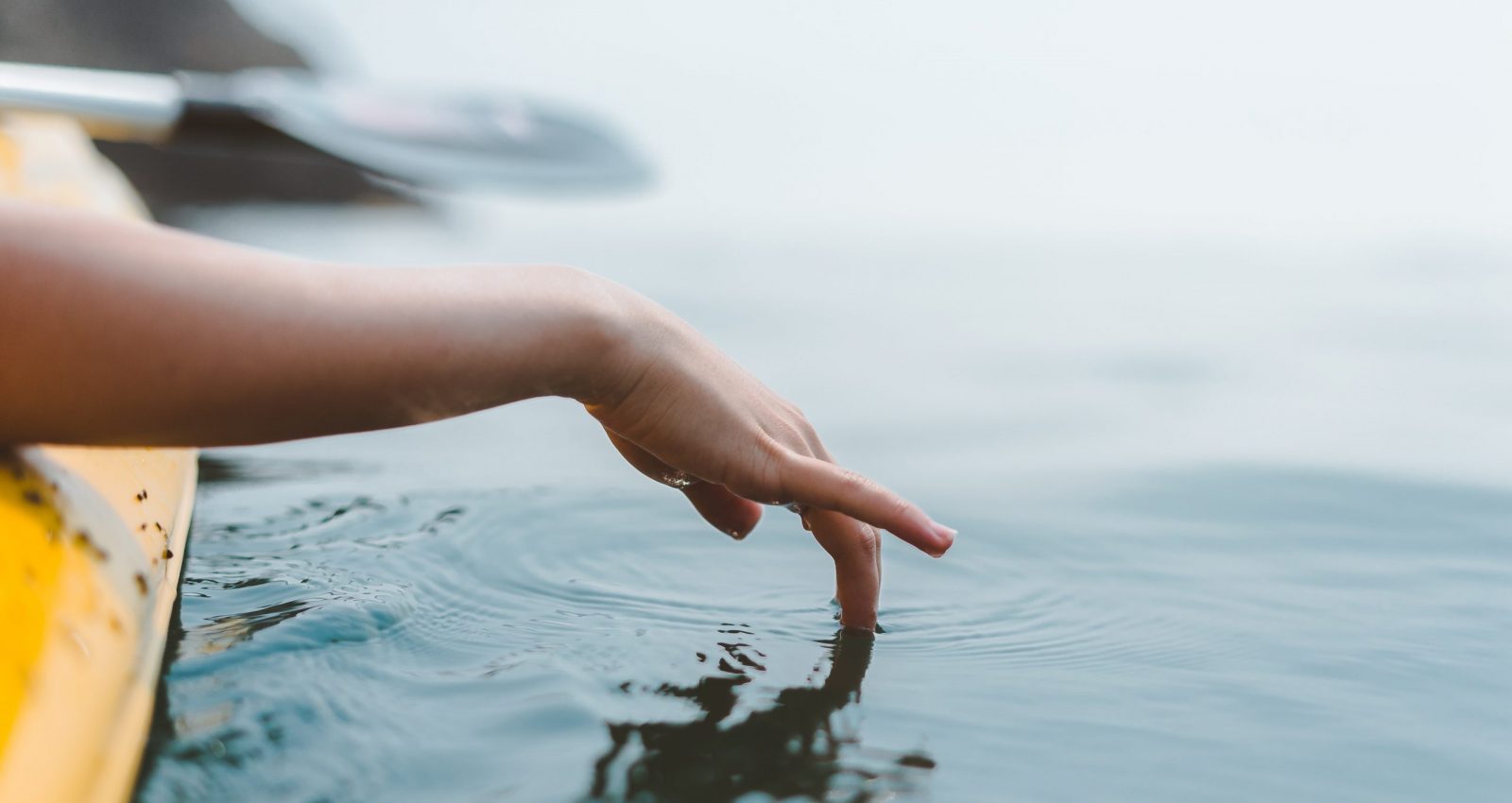